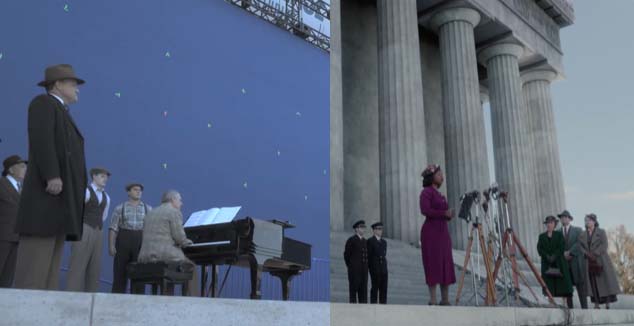 Shot in Georgia and set in Washington, D.C., ‘The First Lady’ called on Legion to digital recreate the iconic Lincoln Memorial with the detail needed for a pivotal scene that plays out in a fully CG environment to be indistinguishable from practical footage.

‘The First Lady’ tapped Legion’s particular expertise to help reframe a seminal historical event in episode seven – the performance of world-renowned contralto Marian Anderson on the steps of the Lincoln Memorial.

While existing footage provided the series with historical imagery of the 1939 public concert, VFX Legion was relied on to give viewers a look behind the curtain.

Legion, an end-to-end visual effects company specializing in creating set extensions that replicate real-world locations, has produced hundreds of meticulously detailed CG environments for films and episodic series seeking out its expertise. Launched as a fully remote company in 2013, Legion’s long-established pipeline, and scale of resources uniquely position the studio to meet the industry’s growing demand for its brand of high-quality virtual locations in today’s new norm.

The company’s experience digitally rebuilding iconic landmarks in the nation’s capital – while consistently meeting challenging production deadlines – made it a great fit for ‘The First Lady.’ The go-to sole visual effects vendor for high-profile episodic series – including ‘Scandal,’ ‘How to Get Away with Murder,’ and ‘Madam Secretary’ – has been called upon season after season to seamlessly transport practical footage to locations in Washington, D.C. where political dramas unfold.

Drawing from an extensive visual effects library, which includes a CG rendering of the Lincoln Memorial originally created for the CBS series ‘Madam Secretary,’ artists repurposed digital assets. The team customized the image to align with art direction from the client and delivered a high-quality, photorealistic shot that maximized cost-effectiveness and efficiency.

The scene shines a light on Eleanor Roosevelt’s instrumental role in securing the Lincoln Memorial after Constitution Hall turned away the world-famous black singer. Attended by tens of thousands and broadcasted to millions, thanks to the intervention of the first lady, the performance put the issue of racial discrimination in the national spotlight.

Practical footage captures the singer as she finishes rehearsing a song before a bank of circa 1930s microphones accompanied by a pianist, and has a conversation with Eleanor Roosevelt (Gillian Anderson,) who had been watching from the wings.

The actors were shot in front of bluescreens strategically positioned to recreate the look of the concert footage. Artists then replaced the screens with a digitally reconstructed image of the Lincoln Memorial echoing the scale and angle of the historic footage.

Legion’s team seamlessly blended the live action with the virtual venue, delivering a final sequence that brings the retelling of a historic precursor to the civil rights movement to life.

Season one of ‘The First Lady’ is currently streaming on Showtime.

No comments to show.